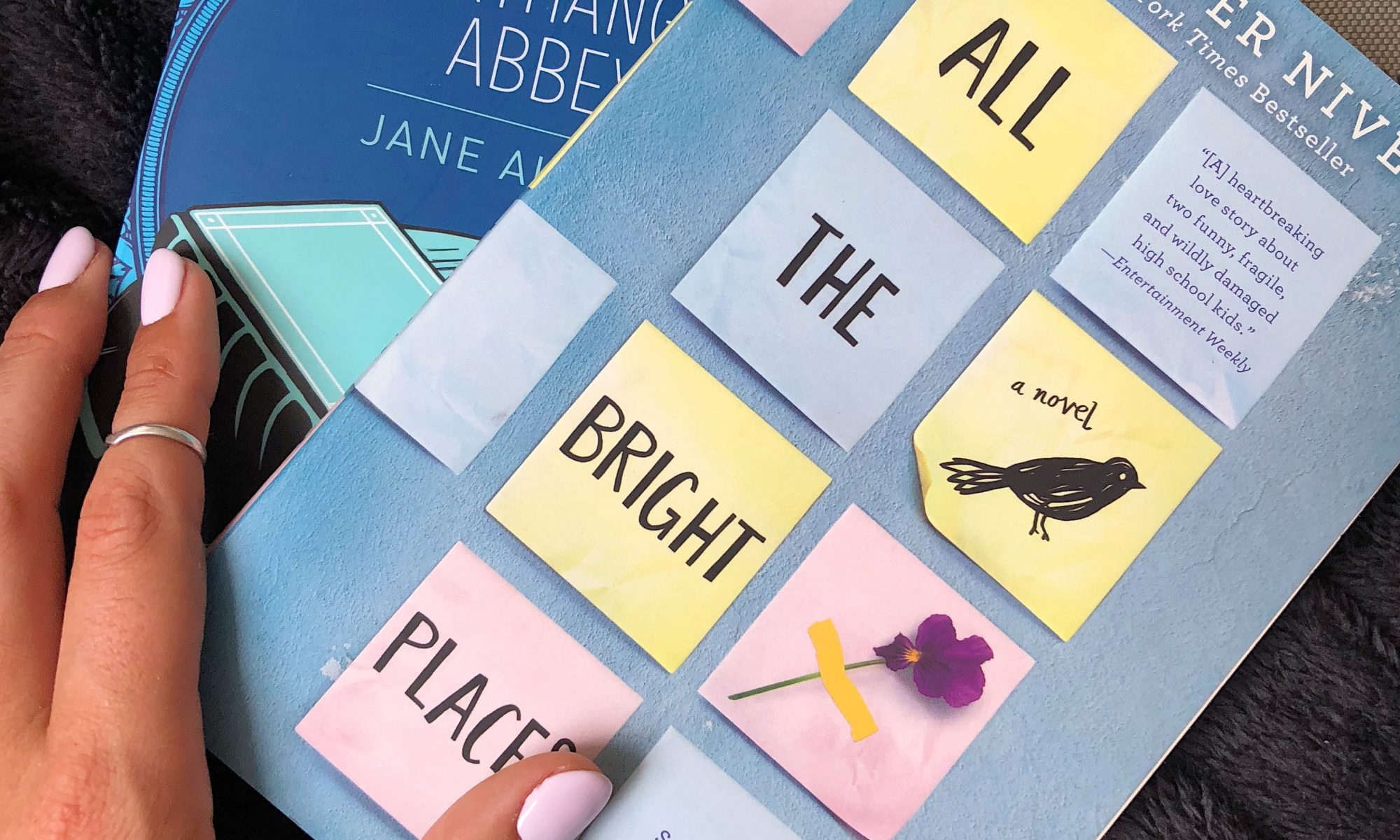 But first, with that out of the way, here’s the usual review run-up.

First, the synopsis of All the Bright Places, pulled from Amazon:

“Theodore Finch is fascinated by death. Every day he thinks of ways he might kill himself, but every day he also searches for—and manages to find—something to keep him here, and alive, and awake.

Violet Markey lives for the future, counting the days until graduation, when she can escape her small Indiana town and her aching grief in the wake of her sister’s recent death.

When Finch and Violet meet on the ledge of the bell tower at school—six stories above the ground— it’s unclear who saves whom. Soon it’s only with Violet that Finch can be himself. And it’s only with Finch that Violet can forget to count away the days and start living them. But as Violet’s world grows, Finch’s begins to shrink. . . .” 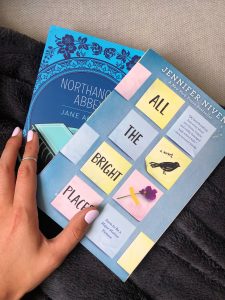 It does a great job of illustrating some of the most beautiful aspects of the story without really giving anything away.

Finally, here’s my review of All the Bright Places!

To start, this is a really great YA book. In general, I quite enjoyed it. The characters are unique, relatable, and realistic. Their struggles feel real, gritty, and personal. And the love story is as warm and fuzzy as it is heartbreaking.

The plot is quirky and adorable. It takes you on a romp through some of the most odd and wacky places in Indiana as part of a school project that Violet and Finch have to do. The family dynamics are interesting and dynamic.

Also, in writing a novel with mental illness at its very core, Jennifer Niven does a good job.

There is one particular quote which I find quite poignant. It is from Finch’s point of view, when he is at a suicide support group. TW: mental illness, self harm, suicide, labels, harsh language: “I want to get away from the stigma they all clearly feel just because they have an illness of the mind as opposed to, say, an illness of the lungs or blood. I want to get away from all the labels. ‘I’m OCD,’ ‘I’m depressed,’ ‘I’m a cutter,’ they say, like these are the things that define them. One poor bastard is ADHD, OCD, BPD, bipolar, and on top of it all has some sort of anxiety disorder. I don’t even know what BPD stands for. I’m the only one here who is just Theodore Finch” (285).

There is SO much to unpack in this quote. First, something I’m always talking and thinking about is stigma. Finch wants to get away from that, which is completely normal and understandable. But it’s also important to challenge it. Finch also wants to get away from labels. I agree that it’s harmful to label yourself as your illness. Anxiety is not who I am. I prefer to say that I have an anxiety disorder, and not say that I’m an anxious person. Mostly because I’m not always an anxious person. But also because our mental illnesses do not define us.

However, it is likely that Finch has bipolar disorder, and it is not officially diagnosed. His school counsellor is starting to go down that road. I wonder if Finch could understand his diagnosis and had been given a label earlier, if things could be different for him. Maybe that’s the point of the story. There’s definitely more to unpack here, but I’ll save that for my mental health blog, Lexical Abandon.

So, like I said, I think Niven does a pretty fantastic job writing about mental illness in All the Bright Places.

And the most important part of my point in this case is the wording. My wording, not Niven’s.

Her wording was committed suicide. Which I vehemently disagree with. Again, I’m going to say more about this on my personal blog, Lexical Abandon. However, it deserves talking about here as well. Saying that a person committed suicide gives their passing the connotation of a crime. Which it is not. It is unfortunate. And terribly, terribly sad. It is heartbreaking. It’s a tragedy that hurts other people. But it is not a crime. And most times, it is not even a choice.

Every time I encounter the phrase “commit/committed/commits suicide,” I challenge it. Vocally. And I invite you to as well.

The thing that I find most interesting is that in her afterword, Niven uses “died by suicide,” not “committed.” I wonder why she chose the other wording in the actual story. I wonder if perhaps she thought it would be more realistic for a teenager to not know the right wording. I don’t know.

Let’s work to end the stigma, and help people who suffer with various mental disorders and who experience suicidal ideation or thoughts of suicide.

Overall, I give All the Bright Places 4/5 stars. It’s a page-turner (not in the sense that the actual plot is incredibly exciting, it just keeps you hooked). Further, it deals quite well with issues surrounding mental illness until the end. And it pulled at my heartstrings all the way through.

Enjoy your reading (but prepare to need tissues).

2 Replies to “Book Review: All the Bright Places by Jennifer Niven”