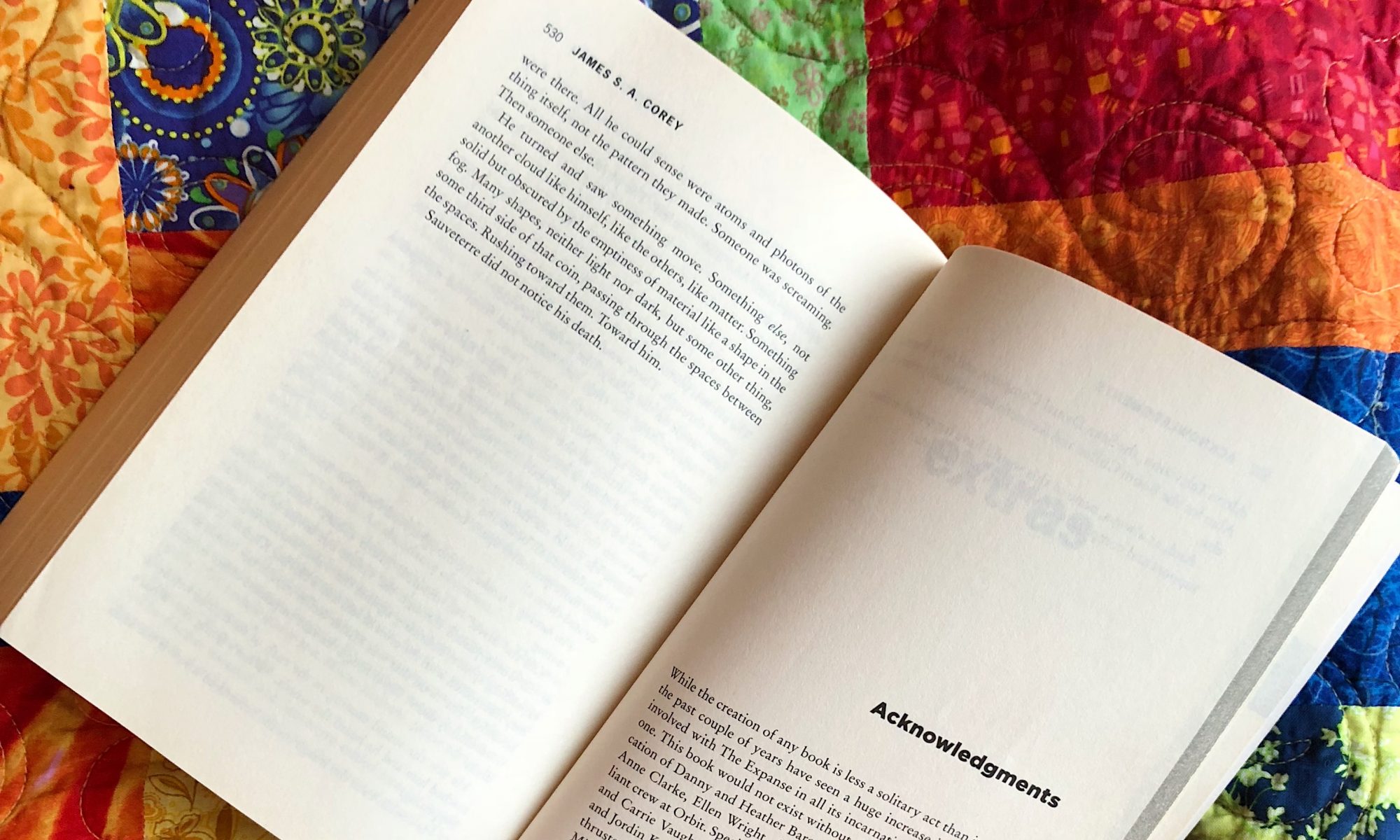 Nemesis Games is the fifth installment of the epic space saga by James S. A. Corey, the pen name of authors Daniel Abraham and Ty Franck.

If you’re not familiar with the series, one of the quotes on the cover by NPR Books reads as follows: “The science fictional equivalent of A Song of Ice and Fire.” Essentially, it’s the equivalent Game of Thrones in space. And what they mean by that, in my opinion, is that you have a whole host of political strategies and wars combined with personal relationships, adventure, a futuristic setting, and really place-based, environmental struggles that come along with living in space on Mars, asteroids, manufactured space stations, moons, and other planets.

“A thousand worlds have opened, and the greatest land rush in human history has begun. As wave after wave of colonists leave, the power structures of the old solar system begin to buckle.
Ships are disappearing without a trace. Private armies are being secretly formed. The sole remaining protomolecule sample is stolen. Terrorist attacks previously considered impossible bring the inner planets to their knees. The sins of the past are returning to exact a terrible price.
And as a new human order is struggling to be born in blood and fire, James Holden and the crew of the Rocinante must struggle to survive and get back to the only home they have left.” 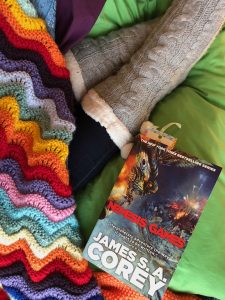 I’m not a huge fan of the covers for the series, but you have to admit that they’re pretty impressive. One of the beefs that I have is that halfway through the series they switched aesthetic — for the first couple of books, the title of the book was in big bright letters down the spine, and for the later books they changed that to the author’s name instead. Like, why?!?!

And here’s my review of Nemesis Games!

Nemesis Games is the fifth book in the The Expanse series. It follows earlier books’ usual pattern of telling the story from multiple characters’ perspectives. However, this time, there is a twist. It is the first time in the series that the four main characters (the crew of the ship Rocinante) do not encounter the conflict of the story together.

Amos is on Earth dealing with the death of someone from his past and meeting with Clarissa Mao. Alex is on Mars trying to reconcile with his ex-wife and meeting with Bobbie. Naomi is dealing with her before unrevealed past on Ceres. Finally, Holden remains on Tycho with the head of the Outer Planets Alliance, seeing to the repairs the Roci requires thanks to her near-fatal trip through the Ring to Ilus (or New Terra, depending on what camp you’re in).

After the characters initially split up, things devolve quickly. Thus begins an exciting political dance of war that presents ambush, catastrophe, and human nature in ways which test limits and both shatter and create bonds. It is an incredible saga with  great in-depth looks at the backgrounds of characters we previously didn’t know much about. It is also a fantastic set-up for what the Epilogue alludes to: an incredibly ominous encounter with some very powerful galactic beings.

I highly recommend this to fantasy and sci-fi lovers alike! However, beware before you start: It’s over 500 pages! So, make sure you have a good chunk of time to set aside while you read, because again similarly to Game of Thrones, there’s a lot to take in. Another plus – the books have begun to be made into a TV series (now on season 3) on Syfy.

My next read is Renegades, by Marissa Meyer, as voted by my Bookstagram friends in my Stories! I’ll post a review once I’ve finished it!

One Reply to “Book Review: Nemesis Games by James S. A. Corey”