Furiously Happy: A Funny Book About Horrible Things is the second book by blogger The Bloggess, aka Jenny Lawson.

I have been wanting to read Furiously Happy since it came out in 2016. I have no idea why I only got to it now. First, because of its seriously eye-catching cover, and then because I found out about its content. We’ll get to that in a second. 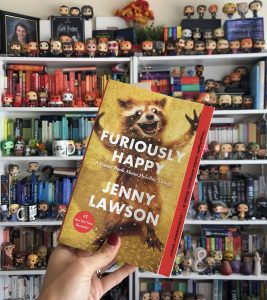 Yes, that is a taxidermied raccoon. And yes, it belongs to Lawson.

And here is the synopsis of Furiously Happy: A Funny Book About Horrible Things from Amazon:

“In Furiously Happy, #1 New York Times bestselling author Jenny Lawson explores her lifelong battle with mental illness. A hysterical, ridiculous book about crippling depression and anxiety? That sounds like a terrible idea. But terrible ideas are what Jenny does best.

“Some people might think that being ‘furiously happy’ is just an excuse to be stupid and irresponsible and invite a herd of kangaroos over to your house without telling your husband first because you suspect he would say no since he’s never particularly liked kangaroos. And that would be ridiculous because no one would invite a herd of kangaroos into their house. Two is the limit. I speak from personal experience. My husband says that none is the new limit. I say he should have been clearer about that before I rented all those kangaroos.

“Most of my favorite people are dangerously fucked-up but you’d never guess because we’ve learned to bare it so honestly that it becomes the new normal. Like John Hughes wrote in The Breakfast Club, ‘We’re all pretty bizarre. Some of us are just better at hiding it.’ Except go back and cross out the word ‘hiding.'”

Lawson is beloved around the world for her inimitable humor and honesty, and in Furiously Happy, she is at her snort-inducing funniest. This is a book about embracing everything that makes us who we are – the beautiful and the flawed – and then using it to find joy in fantastic and outrageous ways. Because as Jenny’s mom says, “Maybe ‘crazy’ isn’t so bad after all.” Sometimes crazy is just right.”

Finally, here’s my review of Furiously Happy: A Funny Book About Horrible Things!

This book was fantastic. I’m going to get that out there right away.

As the title states, it’s definitely a funny book. I don’t normally have visceral, physical reactions to books. It’s very rare that I cry while reading (the last time was Lily and the Octopus (review upcoming), but that was really a case of grief I was already sitting in and poor timing, and I can’t remember a time before that). I laugh out loud at books far less often (read: pretty much never). But I was laughing out loud at Furiously Happy. Throughout. Poolside in Cuba while people were eating a fancy à la carte meal nearby. In the hotel lobby while drunken revelers sang raucously beside me. On a bus full of half-asleep homeward-bound travelers at 12:30am. On my armchair, at home in my apartment, all by myself. Everywhere. This book is really funny.

The “horrible things” this book was about, however, were more important to me. And they were what really drew me to the book in the first place. Jenny Lawson has an anxiety disorder. She also has multiple sleep disorders, a personality disorder, rheumatoid arthritis, and goes through periods of clinical depression.

Lawson talks a lot in her book about having people on Twitter to talk to about her mental illnesses and the struggles she deals with in her daily life, and how it helps her to know that there are other people out there who feel like she does. That’s the way I felt reading this book. I have an anxiety disorder and a couple of chronic health conditions, and her struggles were so relatable. She also talked about several really great coping strategies that are definitely going to be helpful to me in the future. And I think most importantly, she consistently talked about her struggles with humour and optimism, even if they were dark and scary. It gave me an enormous sense of hope, and great ideas for how to help myself and others when things are not good.

The book’s namesake, this is an idea that Lawson first came up with on her blog. She explains it best, and that explanation is quoted in the book synopsis I posted above. However, I do love how she elaborates on it:

“In fact, I’m starting a whole movement right now. The FURIOUSLY HAPPY movement. And it’s going to be awesome because first of all, we’re all going to be VEHEMENTLY happy, and secondly because it will freak the shit out of everyone that hates you because those assholes don’t want to see you even vaguely amused, much less furiously happy, and it will make their world turn a little sideways and will probably scare the shit out of them. Which will make you even more happy. Legitimately. Then the world tips in our favor. Us: 1. Assholes: 8,000,000. That score doesn’t look as satisfying as it should because they have a bit of a head start. Except you know what? Fuck that. We’re starting from scratch. Us: 1. Assholes: 0.”

Theoretically I love this idea, and I think that the amount of laughing I did at this book suggests that my body loves it just as much as my mind does. There are many things I’m going to take away from this book, but I think I’m most excited about trying to bring the “furiously happy” mindset into my life.

I highly recommend this book, both for those suffering from mental illness(es) and everyone else in the world, because everyone is touched by mental illness, even if not directly. And it’s just a really funny book that will brighten anyone’s day, whether you connect with the subject on a personal level or not. Guaranteed.